Motor/Cycle Arts Foundation (MAF) is the world’s largest 501(c)(3) non-profit dedicated to the creation, preservation, and distribution of motorcycle arts.

Based in New York City, and operating programs and projects worldwide, MAF champions the cultural importance of motorcycles and the impact they have had on various art-forms around the world.

Since 2016, MAF’s public and private programs, exhibitions, and events have been visited in person by over 1 million guests. Our virtual programs, online exhibitions, publishing platforms, and social platforms have over 760 million likes, views, comments, shares, and media impressions worldwide in over 35 languages.

The most compelling name ever for a motorcycle, the Vincent Black Lightning was the world’s fastest production bike for 25 years. Paul d’Orleans rides a street legal beauty on the streets of San Francisco, and discusses its amazing history.

Motor/Cycle Arts Foundation and its media arm The Vintagent join the fun at the Quail, the finest motorcycle-only concours d’elegance in the world.

Richard Vincent was a SoCal golden boy in the early 1960s, winning motorcycle races, surfing with George Greenough, driving hotrods, shooting film and photos of youth culture. In 1967 he was drafted and badly wounded in Vietnam, and returned a changed man to a changed country. Over the next 45 years, he healed himself by healing a landscape: 2300 acres of badly logged property in rural Oregon that he turned into a sanctuary and refuge, as he rediscovered motorcycles with the encouragement of his sons.

The world’s first all-electric vehicle festival! Racing, test rides, demonstrations, brand booths, and nightly entertainment for adults and youth. All focused on the explosion of energy in EV mobility.

A new podcast series of the best stories on wheels, past present and future. Stories, stars, scandals, and serious subjects.

‘Off-road to off-world’ was the theme for our extraordinarily diverse collection of rare vehicles that did the distance. From round-the-world motorcycles of the 1920s to Mars rovers from NASA, plus sci-fi gems and theoretical lunar motorcycles, this film takes you into the heart of the process and delves deep into overland culture and its hero’s.

Italian design reached an apex in the 1970s, and Italian brands swapped the ‘world’s fastest road bike’ title, making the fastest, best-handling, and best-looking motorcycles in the world. We showcase the best of the decade with extraordinarily rare machines.

The original Baja buster, the Honda CL72 was the first motorcycle to ride from Tijuana to La Paz, in 1962. Paul d’Orleans rides a CL72 in the Baja desert, and talks about its history, and the troubles of riding a 50 year old dirt bike as the maker intended.

Book Ton Up! A Century of Café Racer Speed and Style

The go-fast urge predates motorcycling, but found its natural outlet on two wheels. Ton Up! documents the long history of what became known in the 1950s as cafe racers: from the Speed Merchants and Promenade Percys to the electric cafe racers of the future, illustrated with hundreds of unpublished or extremely rare photos.

The world’s first exhibition of any kind (still!) including only electric motorcycles: racers, record-breakers, prototypes, cafe racers, dragsters, and even road bikes: 25 of the most amazing and important electric bikes in history.

Motor/Cycle Arts Foundation and its media arm The Vintagent join the fun at the Quail, the finest motorcycle-only concours d’elegance in the world.

Electric Revolution at the Petersen Automotive Museum was the world’s first museum exhibition featuring only electric motorcycles and e-bikes and explored the history and current state of the electric industry, seen through the handiwork of both visionary home-builders and established manufacturers, with ultra-stylish contemporary designs that point the way to the future. Supported by Harley-Davidson, the exhibit assembled a dynamic mix of custom, racing, prototype, and production electric motorcycles, as well as the incredibly popular hybrid bicycle and mini-bike styles. 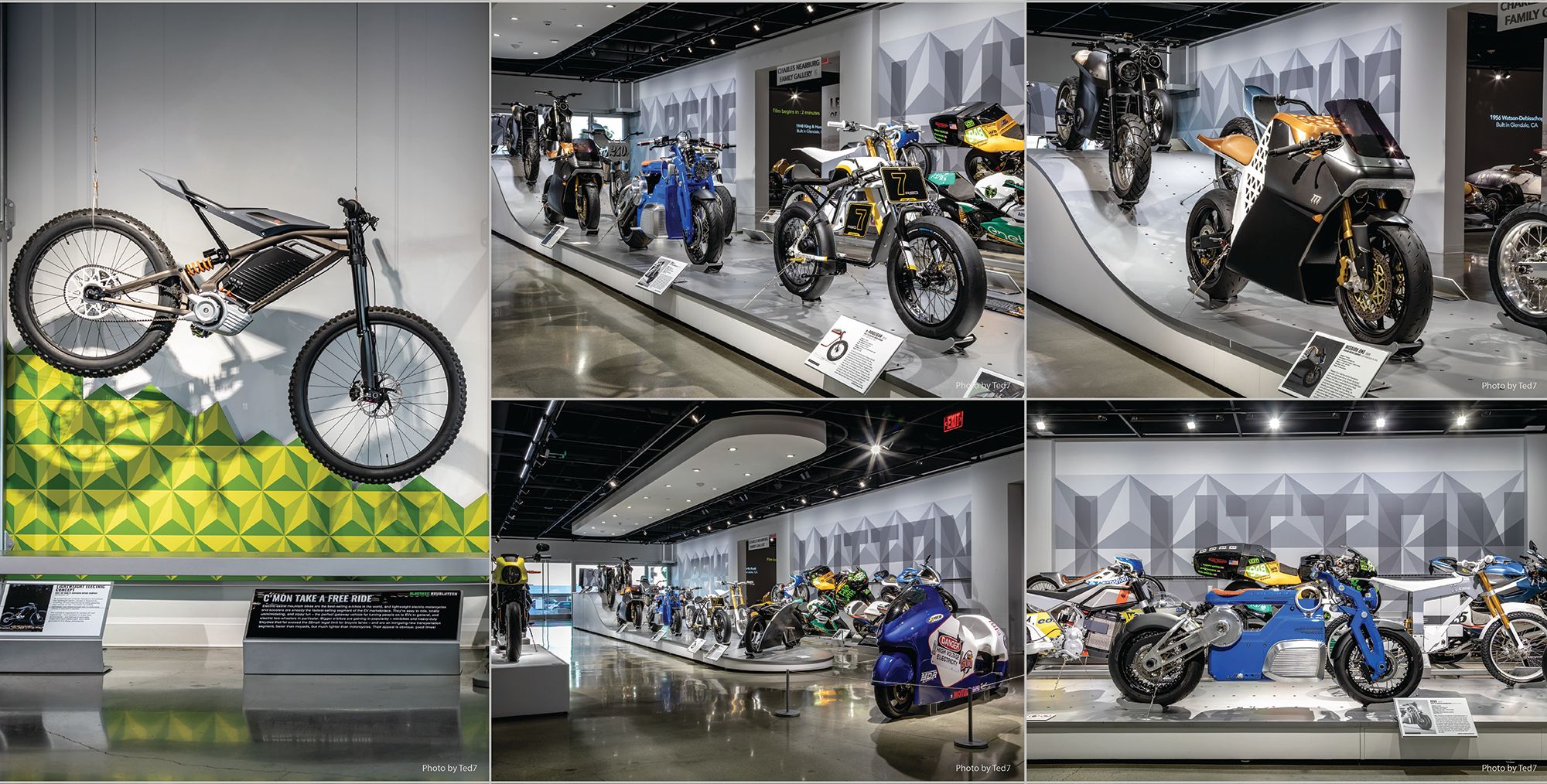 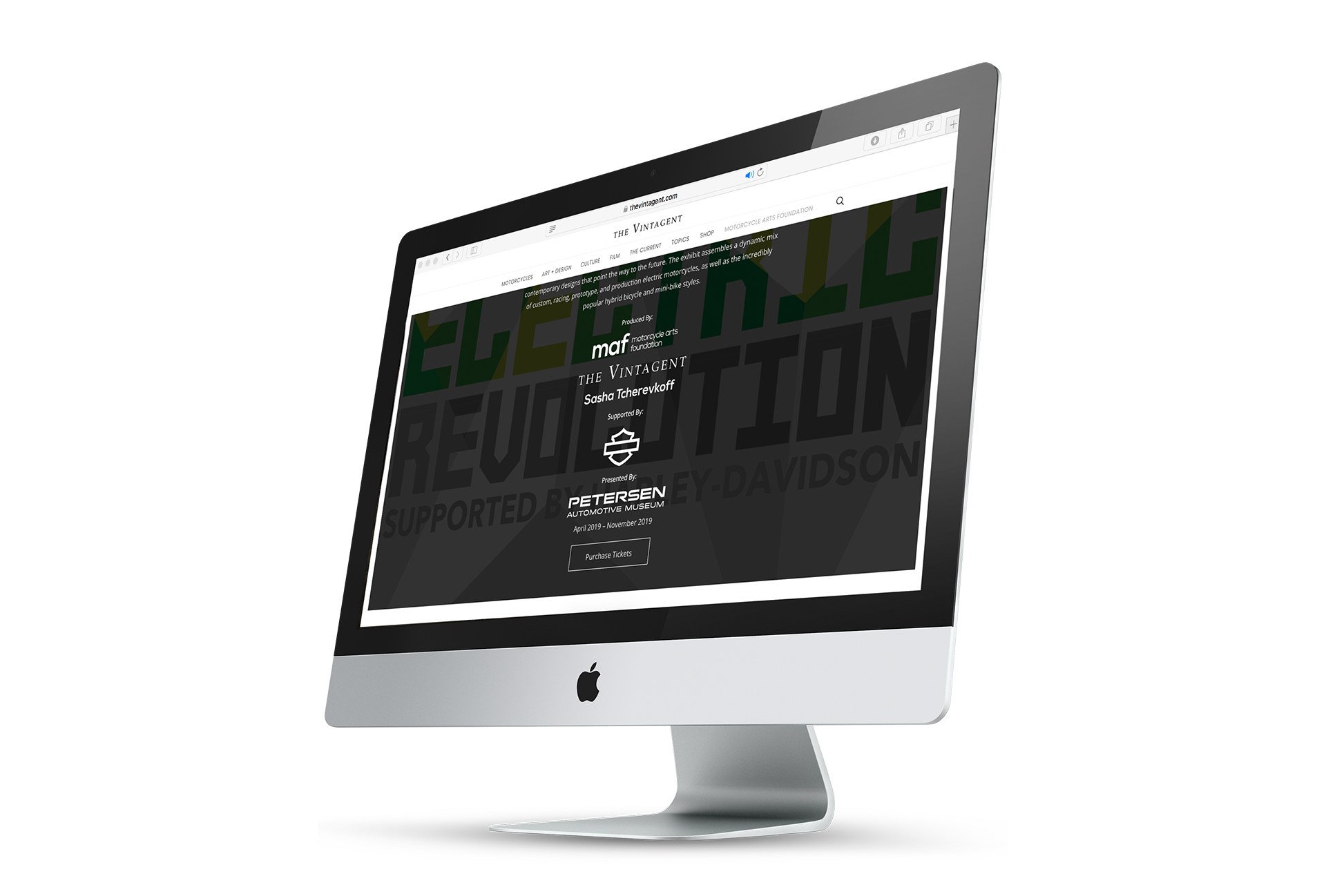 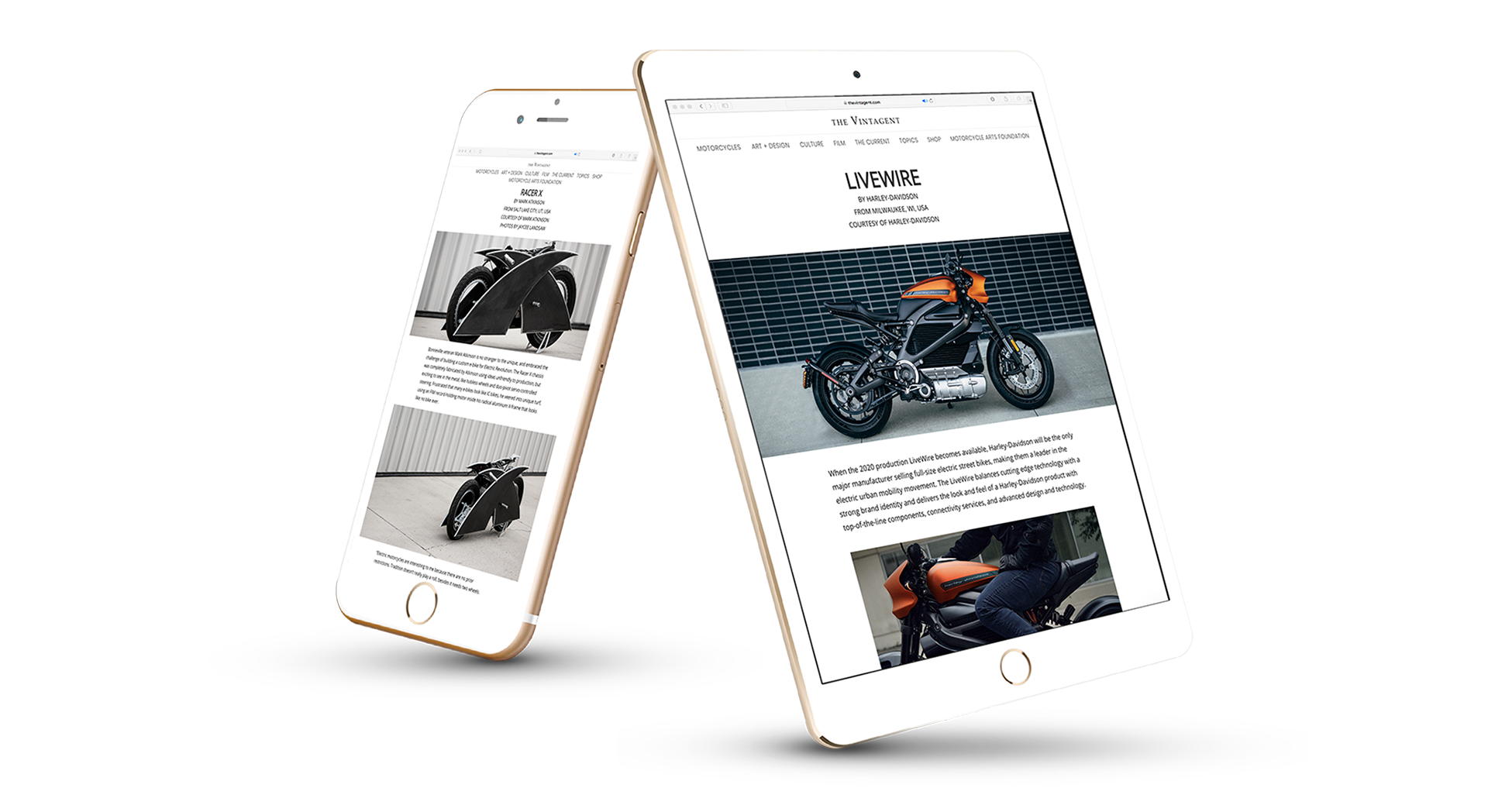 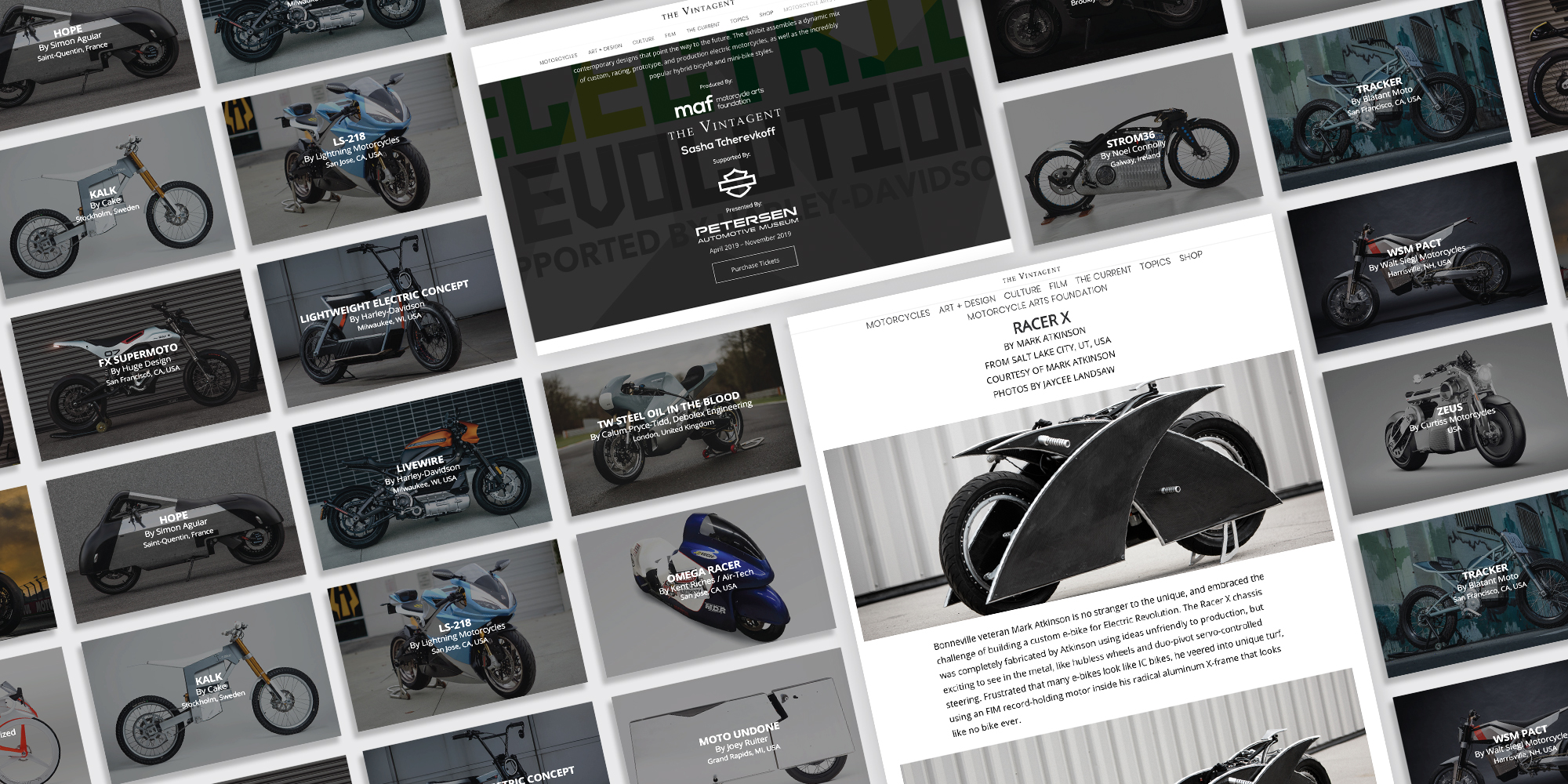 When the stars and crew of ‘Sugar & Spade’ were invited to premiere their film in Morocco, the MAF team stepped up to support their dreams.

The museum catalogue for the Custom Revolution exhibit, the first-ever museum exhibition to celebrate the new, contemporary “Alternative Custom” style, a globalized and internet-fueled artisanal movement that reinvigorated motorcycle design. Included were 25 outstanding machines from 9 countries built from 17 different makes.

The first trade publication on electric vehicles, The Current is based on The Vintagent’s web series of the same name, and dives into the bright future for electric motorcycles and cars.

In less than 2 months, the Motor/Cycle Arts Foundation was able to gather 24 one-of-a-kind motorcycles from some of the most renowned builders around the world, including Roland Sands, Ian Barry, and Shinya Kimura. A truly global collection, the international countries represented in Custom Revolution include the United States, Spain, Japan, Germany, Indonesia, Vietnam, and Ireland.

To complement the physical exhibit, the Motor/Cycle Arts Foundation also designed a digital exhibit for all bikes featured in the exhibit via TheVintagent.com in order to give partial exhibit access to those who cannot visit the exhibit in person and also host additional multi-media such as film pieces submitted by the builders.

In addition, the Motor/Cycle Arts Foundation also wrote, designed, and printed Custom Revolution souvenir catalogs with the assistance of the Petersen Automotive Museum. These 100+ page catalogs include write-ups on every bike featured in the exhibit, as well as high resolution photography and a brief history of custom motorcycles and the dawn of a new custom motorcycle age. 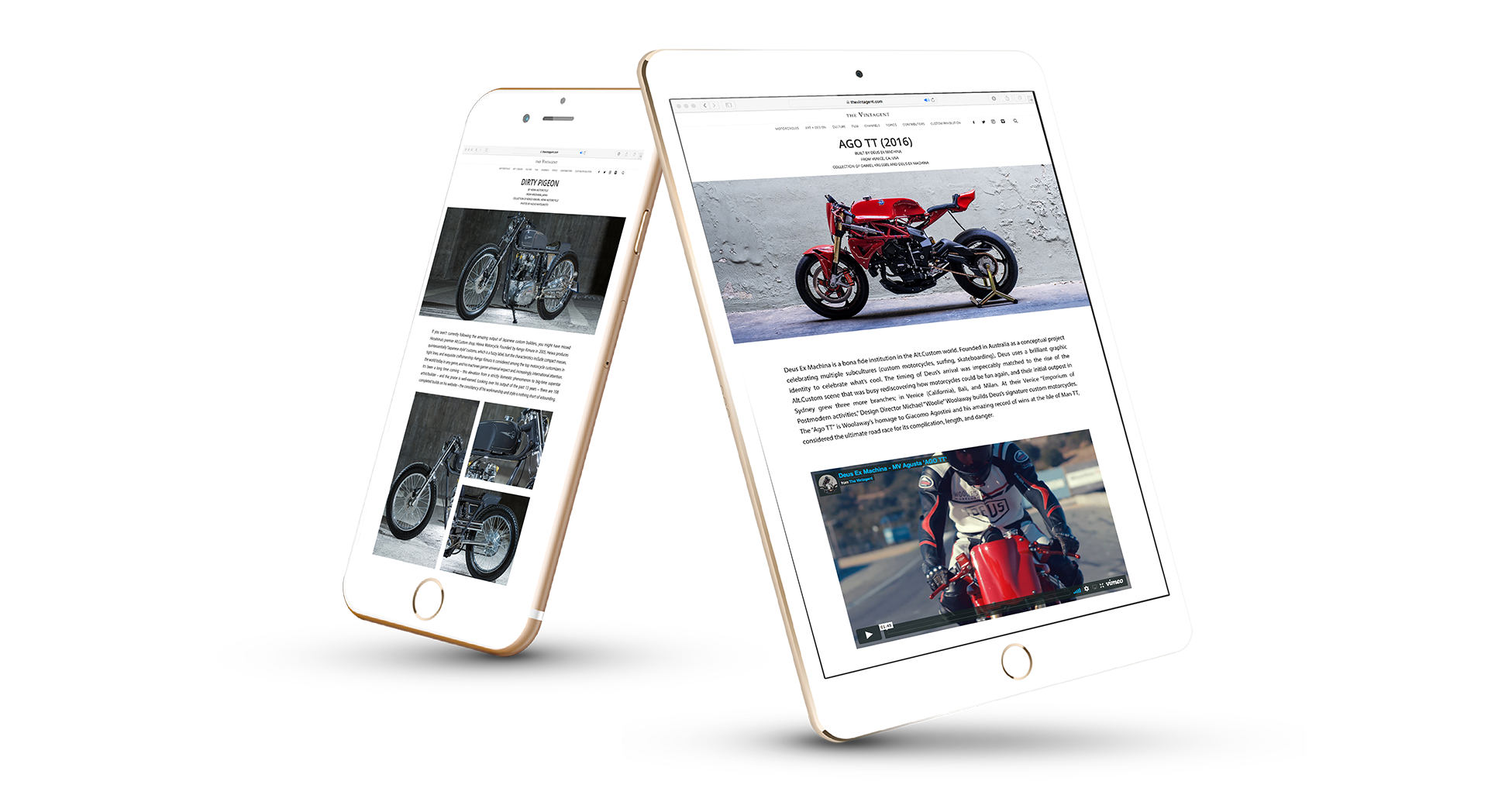 “Our sold-out opening reception had the majority of builders in attendance, as well over 300 motorcycle enthusiasts and industry executives.” 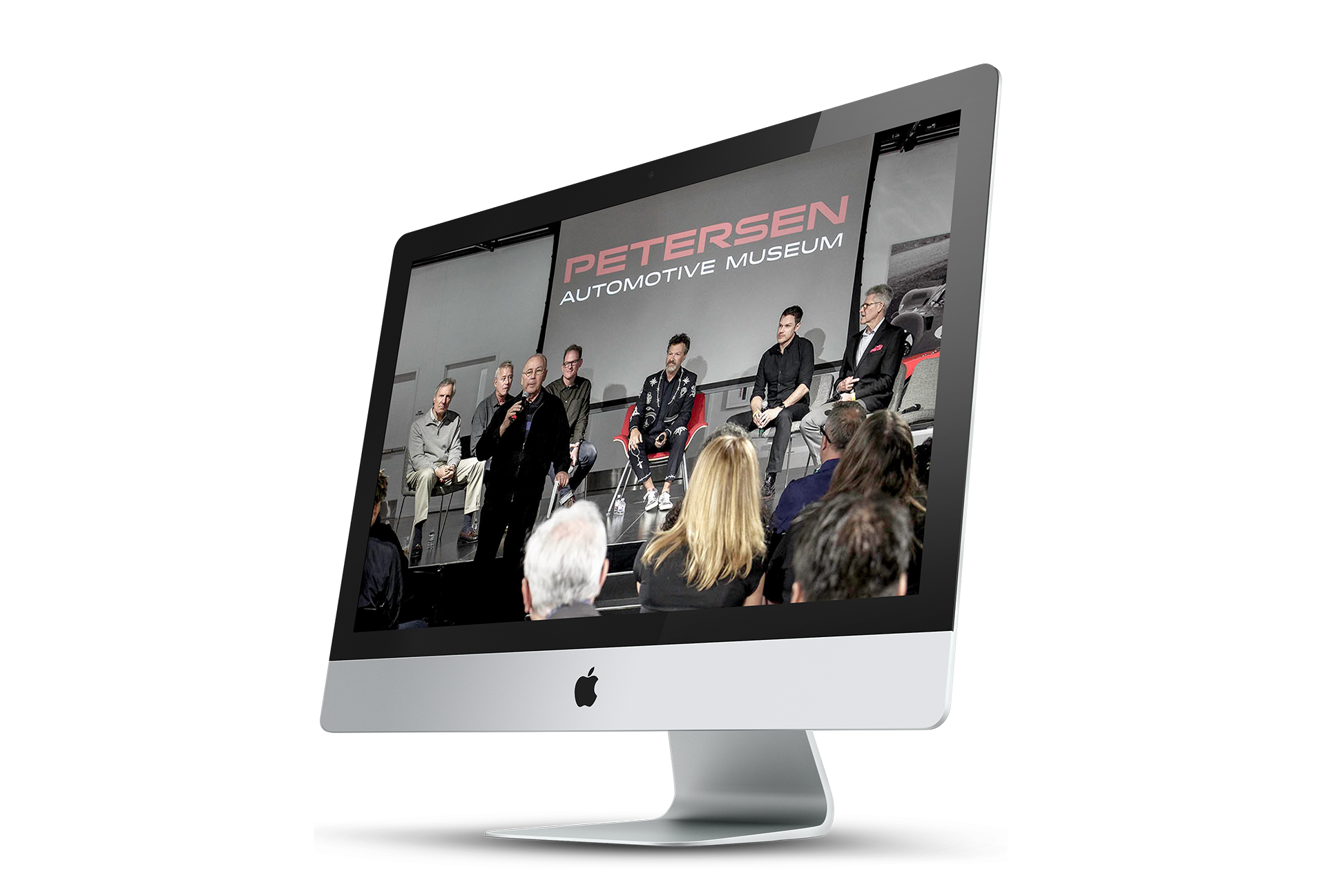 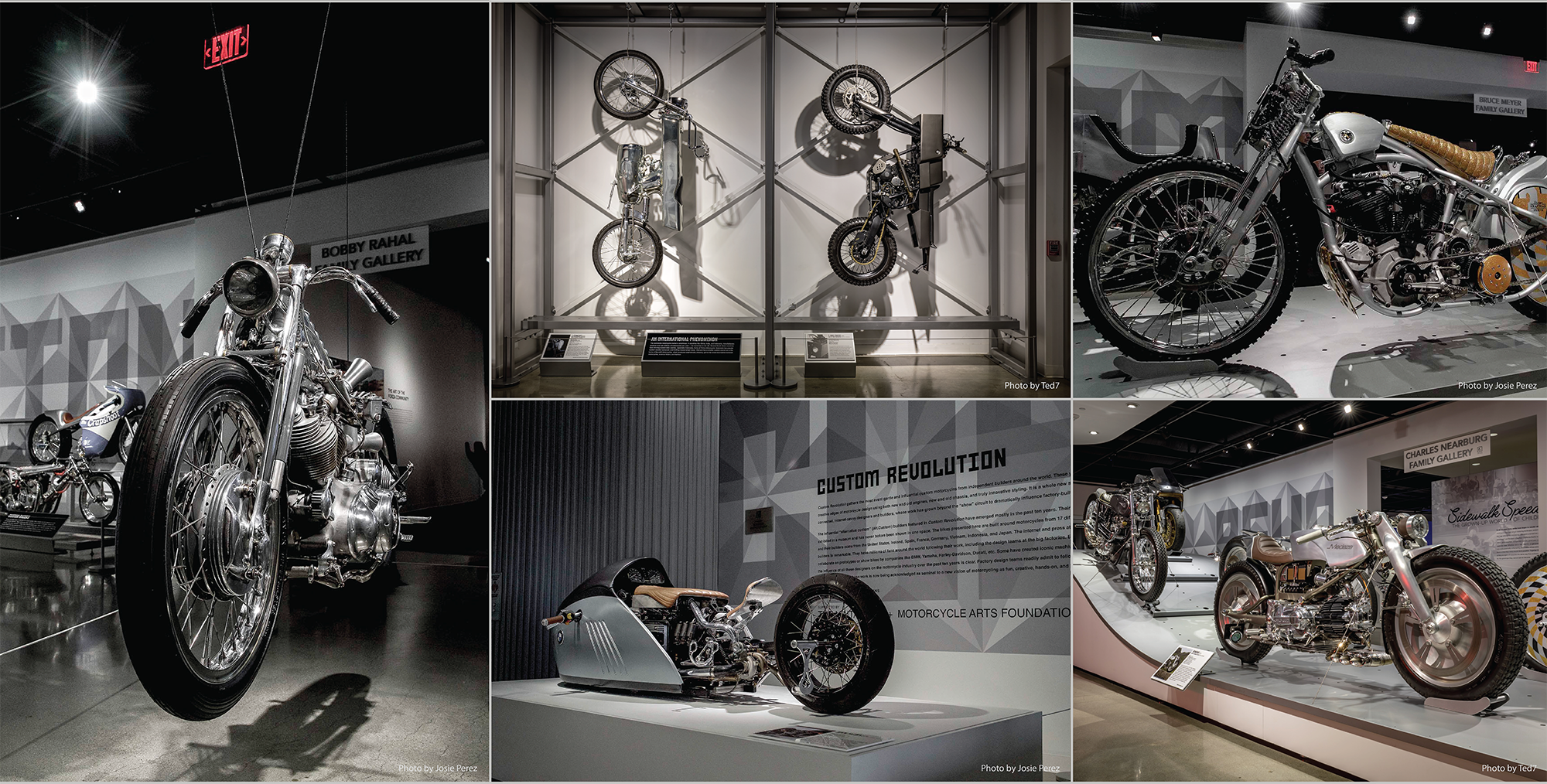 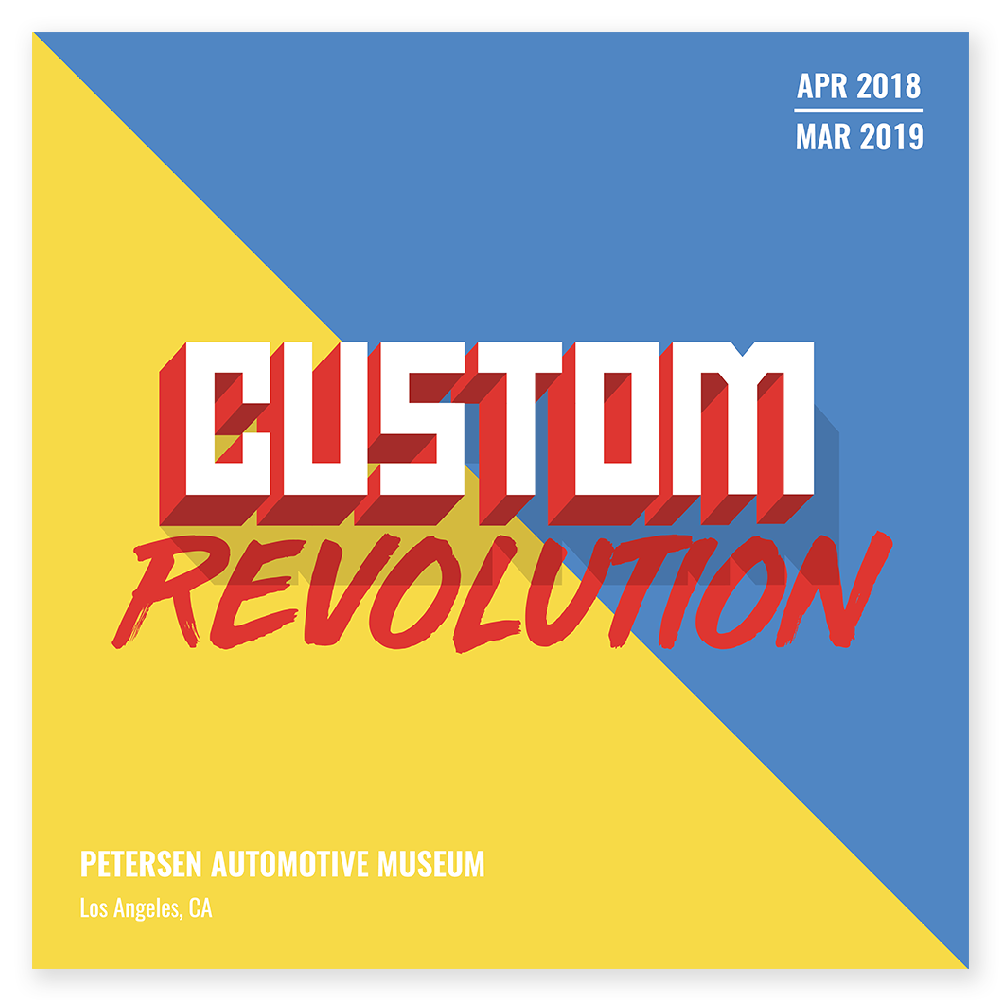 To coincide with the opening of the exhibit, The Motor/Cycle Arts Foundation designed, coordinated, and printed a 120 page catalog featuring original writing by Guest Curator Paul d’Orléans and photographs of every motorcycle include in Custom Revolution. 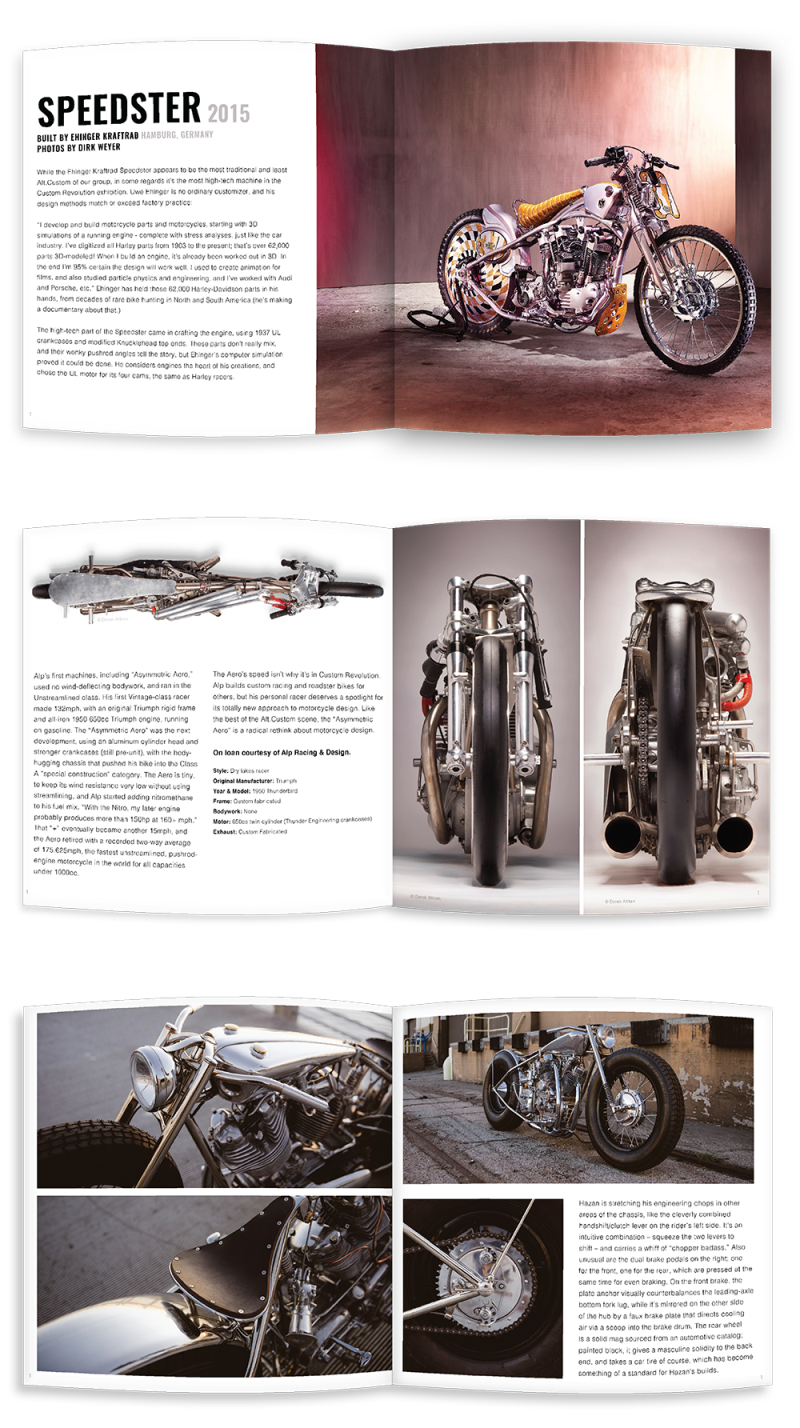 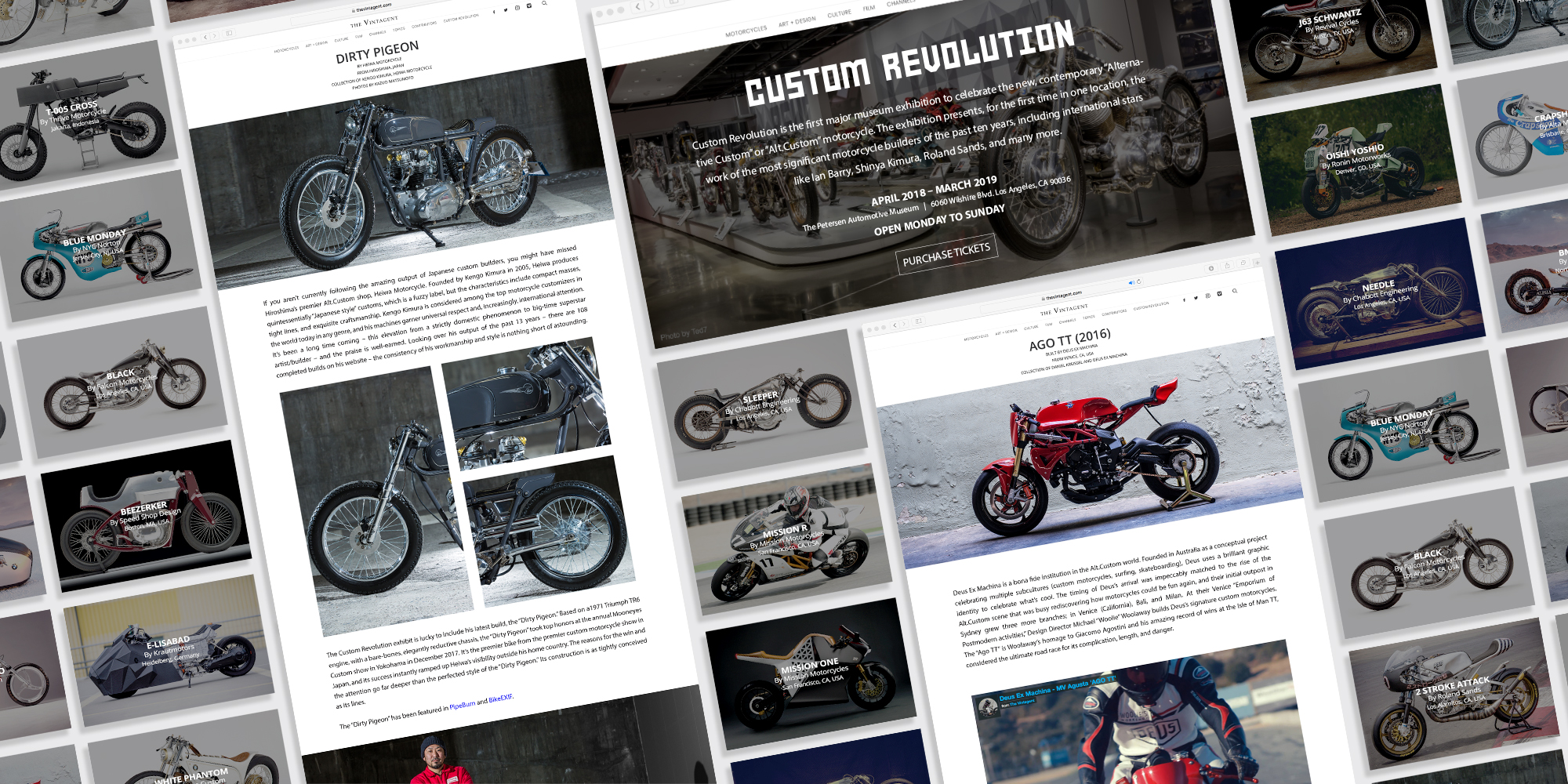 Motorcycle racer, surfer, and photographer Richard Vincent was on track to become a landmark filmmaker in early 1960s SoCal, but was drafted and disappeared for 50 years. David Martinez took a first look at his photos and films from the early 1960s, and Richard told his story.

The rare 1930 Neander-JAP provides a perfect talking point for our love of old machinery.

Motor/Cycle Arts Foundation’s own Paul d’Orléans hosted one of the most anticipated moto-cultural events on the calendar: an invite-only 3-day ride, race, surf, and skate extravaganza.

A close-up of Falcon Motorcycles Black Falcon, the most revered custom motorcycle in recent history. 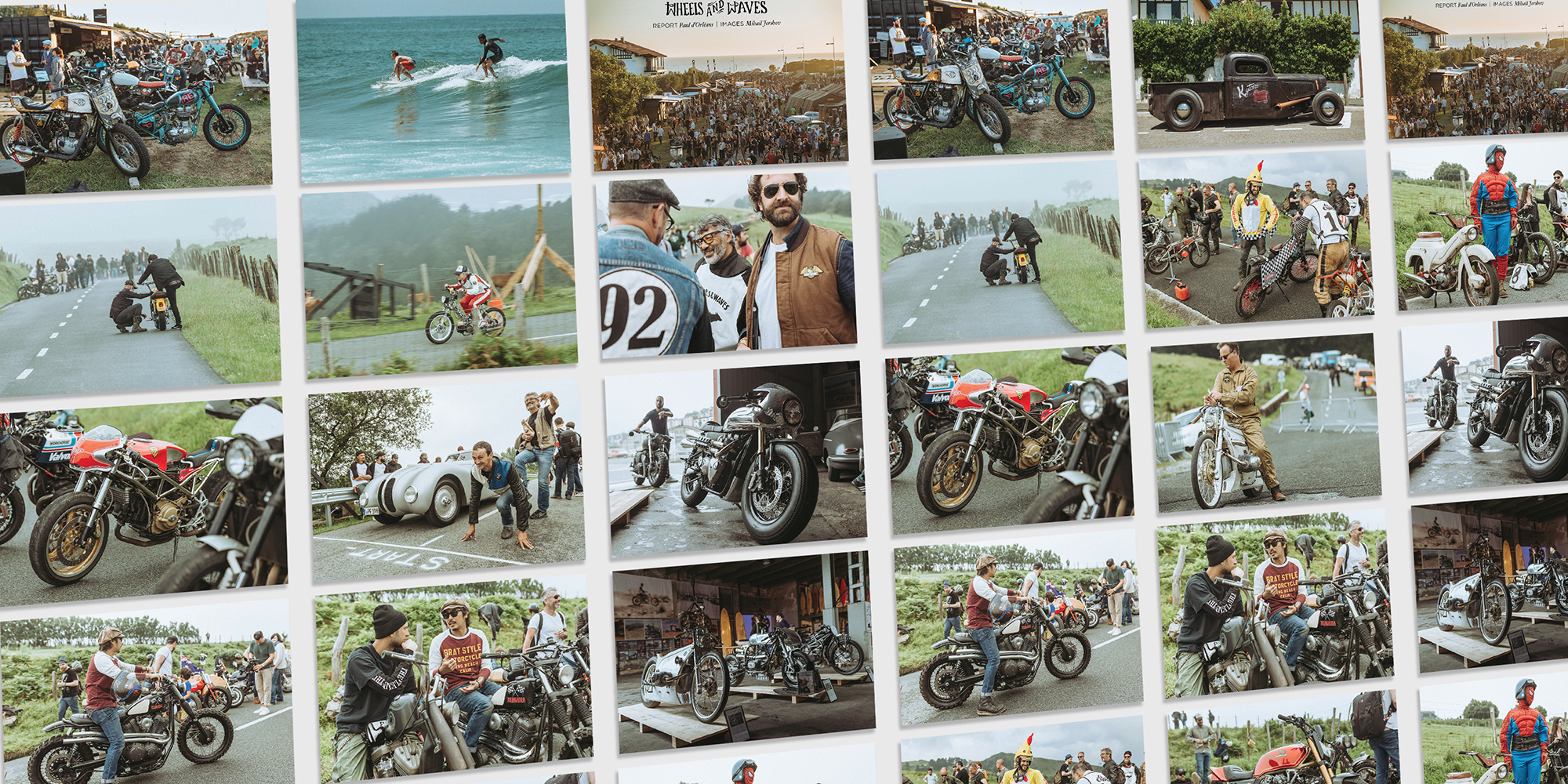 Want to know more about our programs? Sign up for the smartest and most handsome monthly newsletter you will ever get.